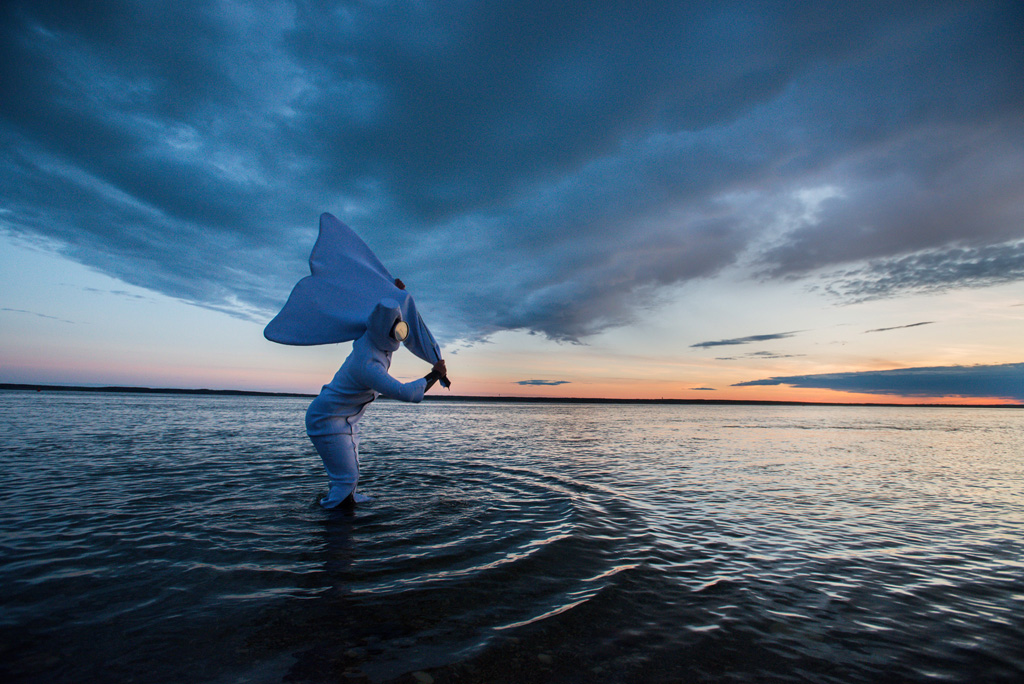 Ryan Klatt of the Becoming Beluga Project wears his homemade beluga suit. Becoming Beluga is a multi-year project of human interaction with belugas through art. Klatt and his team perform for the belugas with music and dance. Photographer Paul Colangelo explains: “The guy in the beluga suit is the head of a group of artists whose aim is to transcend the species boundary between human and beluga. They made a floating stage on a zodiac where they sang, danced and made other cultural offerings. They brought up an opera singer and a contortionist. They made high-fashion life preservers and were fond of leopard print. This guy was trying on his homemade beluga suit designed for the ultimate cultural exchange—complete emersion into the pod. The story was about belugas in Hudson Bay, their habitat threatened by the proposal of exporting oil from the port in Churchill, Man., the Inuit people who still hunt them, the tourists who swim with them and the artists who want to be them.”

Paul Colangelo established himself as a documentary photographer focused on environmental issues and wildlife while living in Vancouver, BC. Through his long-term project, Our Home and Native Land, Paul dedicated himself to shedding light on the seismic shift of core national values in Canada regarding resource development. This body of work explores the country's wildlife and cultural hotspots, revealing what is at risk and reminding us why they were once a celebrated part of the national identity. His work in the Sacred Headwaters helped lead to its protection in 2012. Paul is a National Geographic grantee and a fellow of the International League of Conservation Photographers. His archive is represented by National Geographic Creative. Today, Paul lives in Toronto with his wife and three daughters. More of his work can be viewed at www.paulcolangelo.com.