Editor’s Note: With beautifully reflective writing, Christine Bruce describes her experience participating in a Wet’suwet’en ceremony. Being among community members and learning about practices and language leads the author back to her own Anishinaabe heritage with renewed curiousity. This wonderful piece shows us how spending time with others can bring us closer to home.

If you Google “headstone pull,” there are no results. Apparently, Google hasn’t met the Wet’suwet’en, for whom a headstone pull has been an essential element of life for thousands of years.

When a family member dies, Wet’suwet’en relatives grieve for an extended period — two years is not uncommon — before putting a headstone on the grave. Delivering the headstone is accomplished in a traditional ceremony intended to complete the grieving process. The entire community assists.

I am a band council employee and a local resident of the Wet’suwet’en community of Moricetown (Witset), B.C. I wasn’t born here, though. My grandmother was Anishinaabe, from Byng Inlet, Ont. She lost her status (I believe deliberately) when she married a French Canadian man and moved away from her reservation. Since I’m not Wet’suwet’en, I asked permission to photograph the ceremony. Being fiercely proud of their traditions, but also kind and inclusive, I was welcomed to participate, just as I have been warmly welcomed into their lives.

It’s a mere half kilometre to the cemetery in Witset, yet our journey took nearly two hours, and it was the most joyous ceremony I’ve encountered.

I expected the event to be dolorous, like all the Western grieving ceremonies I’ve attended. We were not raised to practise Indigenous ceremonies as a family. Historically taught to be ashamed of their language, their skin colour, their traditions, in some cases the Canadian Indigenous have set aside their ceremonies and disconnected with their past.

The Wet’suwet’en have been subject to the same history, but they continue to practise their customs with pride — of course I was intrigued. Of course I was.

A couple hundred village members congregated with the family at Centennial Hall. Three honoured family members climbed into chairs on a wagon to accompany the headstones on their journey. Two drummers joined them. Ropes were attached to both ends of the wagon. Family members were by and large posted at the back, while community members generally took up position at the front. The logic of this arrangement became clear quickly, but not immediately. It’s a mere half kilometre to the cemetery in Witset, yet our journey took nearly two hours, and it was the most joyous ceremony I’ve encountered.

It began predictably, with the community guiding the wagon onto Moricetown Loop Road and starting toward the cemetery. Out of nowhere, a family member shouted, “Hooqwa!” and all those at the back of the wagon pulled against the forward momentum: the drumming intensified. The wagon faltered, unable to move forward yet hesitating at the alternative. The next minute, the family relaxed its side and the wagon continued its journey.

Loved ones battle against the natural desire to continue grieving, to remain in this wounded, dependent state with that faint hope of reconnection with our father, our sister or our brother, our grandparent. The Wet’suwet’en allow for an extended period of grief so that the headstone pull can be effective, a joyous release. A looking forward, with the entire community at hand, supportive, helping the family members let go by literally pulling them — and the headstones — to the cemetery. The ceremony is both tangible and abstract, very real yet absolutely existential.

As we approached our destination, some cut the ropes at the back of the wagon, relieving the strain at the front and aggravating the efforts on the family’s end. Family members would lightheartedly race to knot the sliced ropes back together, making game of this symbolic gesture.

“What an incredible example of community building!” I exclaimed to a Wet’suwet’en grandmother watching and waving from her yard.

“Hooqwa is my favourite word today!” she confided, nodding and smiling.

I have since learned the meaning of this mysterious word.

If you think, like I did, that they were shouting some pedestrian encouragement like, “Pull hard!” you’d only have scratched the surface. Hooqwa was Neil Bazil’s nickname, Neil being one of those whose headstone was on the wagon; the family personalized his memorial by shouting his nickname to motivate a pull.

What they’re really shouting is, “We love you! We will remember you! Your spirit will remain strong among us!”

There were regular stops for speeches explaining the ceremony, for remembrances of the loved ones, and for refreshing water breaks. As participants pulled, we sang. We laughed. If there were tears, they were from fondness, thinking of the past, as well as what was happening around us.

As we rounded the turn onto the cemetery entrance, a few pranksters found large rocks and thrust them into the path of the wagon’s wheels, slowing the community’s efforts, one final attempt to hold close those beloved members before letting go.

In my year of living among the Wet’suwet’en people, I have tried to learn their language and to understand their customs. Predominantly, I do this out of respect: their language is complex, and their use of it is playful. Who would have thought I would adopt the use of a passed member’s nickname to motivate joy in my own life?

I am also, though, in private moments, watching the Anishinaabe back in Ontario for cues of my grandmother’s ceremonies and language. Maybe I have not yet learned to let go. Or maybe I need to honour her by learning and celebrating her ways, and letting go of the shame instead. 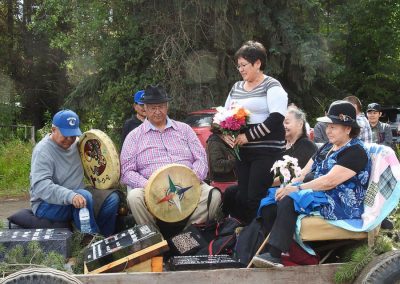 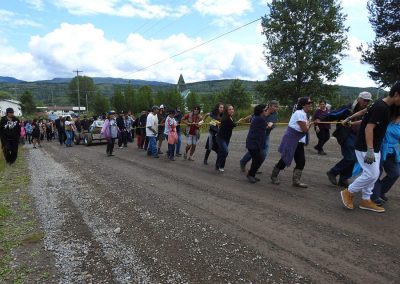 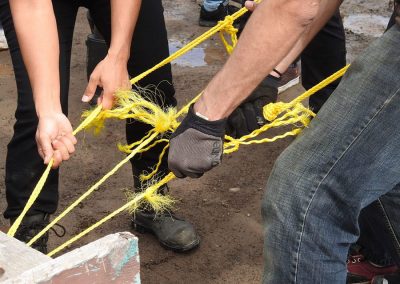 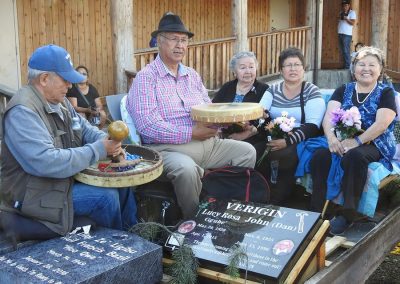 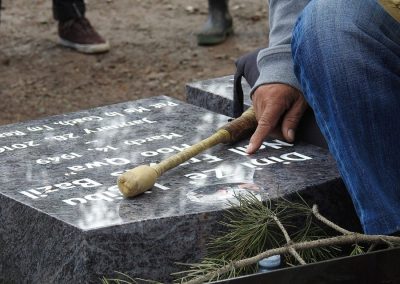 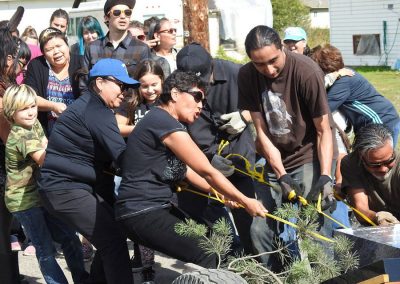 When asked, Christine Bruce—who currently lives and works in Witset (formerly Moricetown)—describes herself as the "village cheerleader." Witset has a long history of colonization and trauma, but the members are working hard to find their past while plugging into the future. Inspired, Christine tells their stories through a celebratory lens. As the Communications Coordinator, her role entails sharing Witsuwit’en news and events through a wide range of media including a monthly newsletter, all social media outlets, a Flickr page, a blog, and until recently, a weekly spoken word broadcast on CICK 93.9 FM. This year, she’s registered for a Community Economic Development course at Simon Fraser University, where she hopes to improve her skills as a cheerleader and a storyteller.