Lothar Schaefer, a retired anesthesiologist, and his partner Debbie Wellwood, a wildlife ecologist, rode out of their small town in northwest British Columbia on recumbent bikes in June 2015, with Schaefer thinking they’d be gone anywhere from two to five years.

They started with a cross-Canada journey to see if they actually liked travelling by bicycle (they did). From Atlantic Canada, they headed south down the east coast, into Mexico and through Central America, where they took a sailboat from Panama to Cartagena, Colombia. Fulfilling a dream, they spent over a year traversing the Andean region, mostly travelling remote roads through towns and villages off the beaten path.

Their original goal was to ride to Ushuaia, the end of the road on mainland South America. But once they arrived, they turned their bikes back north and started riding up the east coast of Argentina. Neither was ready to end their journey and both wanted to continue minimizing their carbon footprint.

I caught up with Schaefer on the northern coast of South America in French Guyana, just as Wellwood was preparing to head home after three and half years and more than 45,000 kilometres. Schaefer has since met up with his son Harold in Mexico City, who joined him for the next leg of his ride back to Canada. Schaefer expects to be home in June or July to spend time in his yard, reconnect with friends and go on some more local adventures.

Below, Schaefer reflects on his travels so far: how biking attitudes differ between North and South America, our ability as a species to change and adapt, and the need for a cultural shift away from consumerism and consumption. 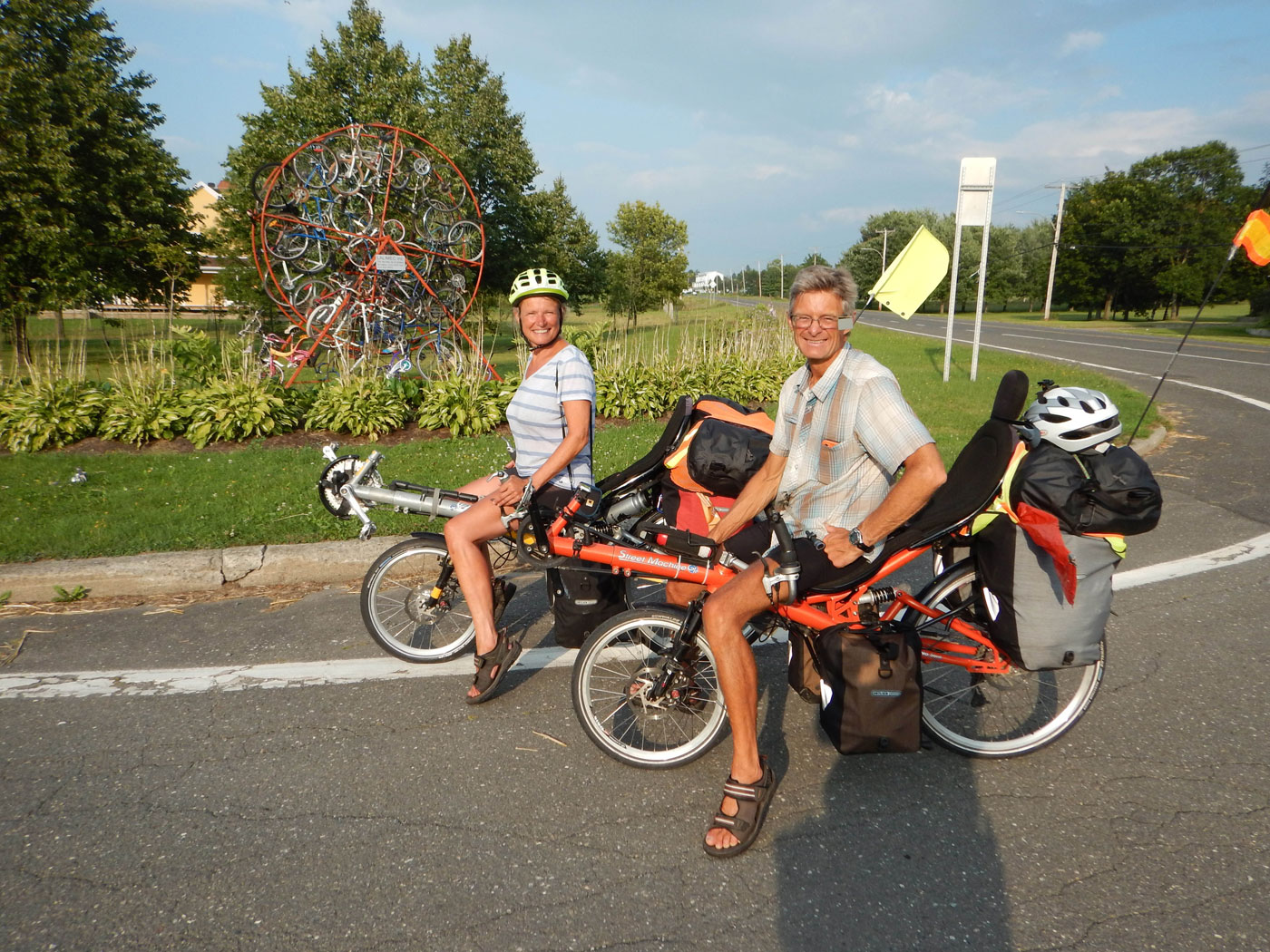 Debbie Wellwood and Lothar Schaefer in Saint-Vallier, Quebec in September 2015, three months after cycling away from their home in Smithers, B.C.

NS: Many of your days bring known challenges—rainstorms, brutal headwinds, extreme heat, steep climbs, narrow roads, traffic, no water, long distances. How do you prepare, stay motivated and forge ahead day after day? And how long did it take for it to feel “normal”?

LS: For me, this journey has felt “normal” almost from the get go; it’s what I’ve wanted for a long time: to experience an unscripted, open-ended travelling life, using my own human energy to propel myself across the landscape. It’s basically a dream come true.

There are a lot of unpredictability and challenges to our unscripted mode of travel. There are no typical days; we never really know what we’re going to get. I love it just like that, and it is usually a very positive experience. I consider it a test or a challenge to roll with it, to find the benefits of having to reach out when we need something, to turn problems into opportunities. That is definitely a recurring theme of our journey in every country we’ve been in (18 in total now). Some of our most memorable and wonderful encounters have been the result of looking for help. 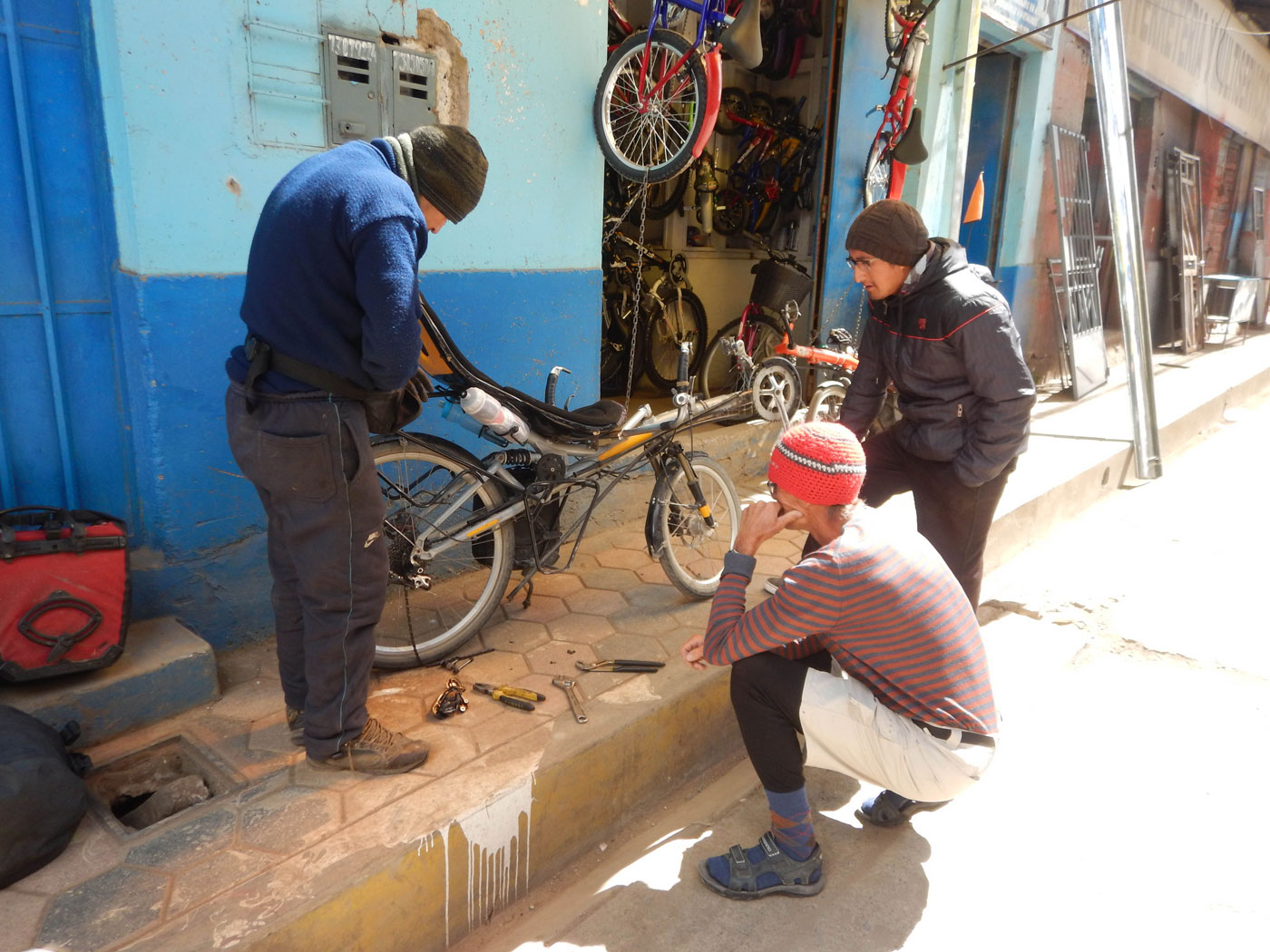 NS: Are you more able to live in the moment and be present after years pedalling, or do you find it easier to drift and spend time reflecting on global problems, family or whatever else may be preoccupying your thoughts? Does it depend on where you’re travelling?

LS: I do a lot of both; sometimes the situation lends itself more to one or the other. There have been many, many days where the present experience—the landscape, the physical conditions—are totally absorbing and I just focus on that. At other times, I spend a lot of time and brainpower on “issues,” especially related to the state of our world as reflected in the region we happen to be in. It turns out we face similar social, economic and ecological problems as humans wherever we happen to live, obviously with many regional peculiarities, but also with many underlying commonalities. There truly is more that unites us than divides us as humans.

It turns out we face similar social, economic and ecological problems as humans wherever we happen to live… There truly is more that unites us than divides us as humans.

I also spend a lot of time thinking about family and previous life experiences, about the role of chance and chance encounters in how our lives unfold. We have a lot of time for contemplation while riding our bicycles! 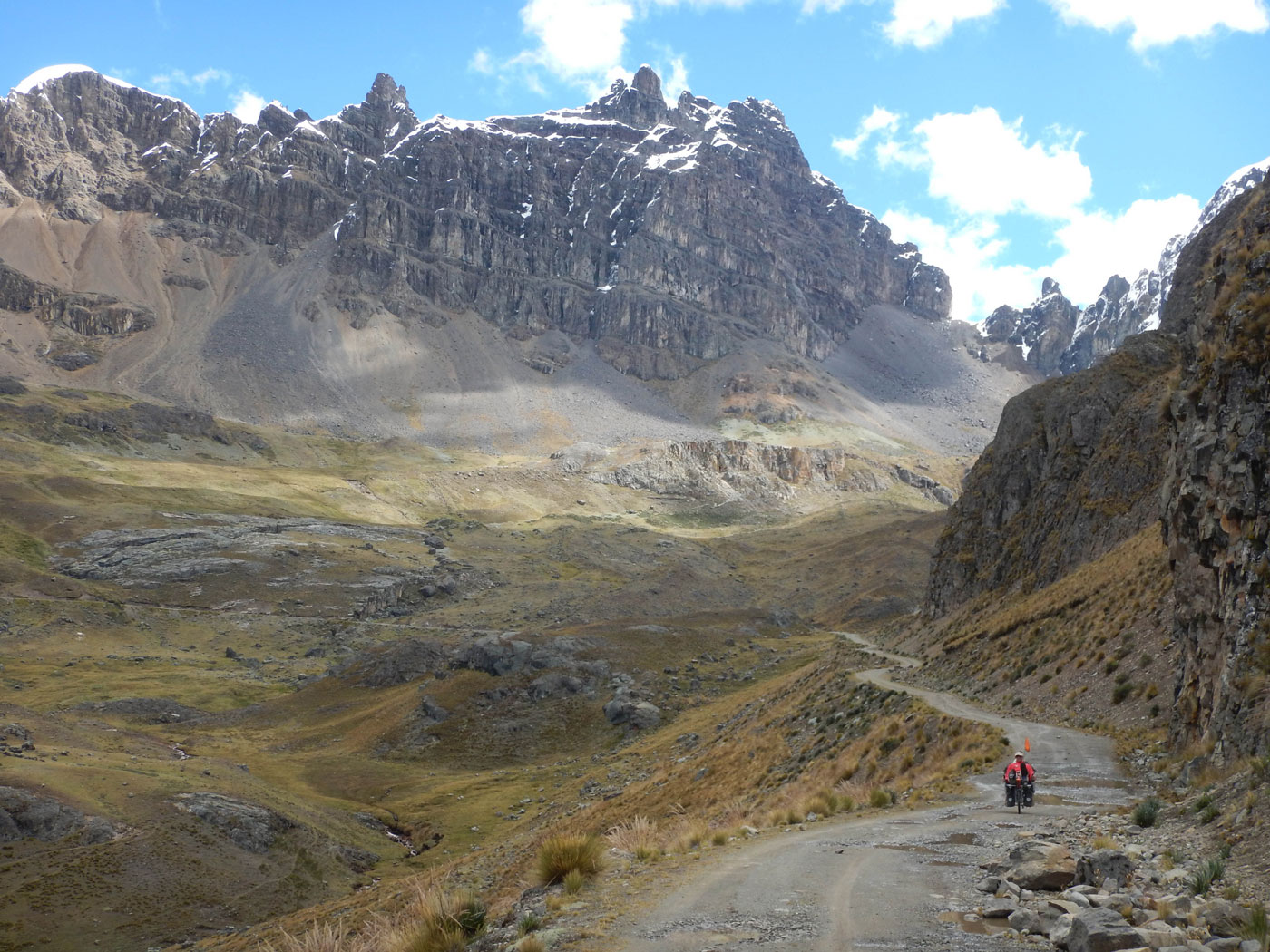 “There have been many, many days where the present experience … is totally absorbing and I just focus on that.” Lothar Schaefer cycles through Huascaran National Park, Peru, in July 2017.

NS: You’ve dealt with hardships like a temporarily stolen bicycle and sleeping in precarious situations, but it seems the recurring challenge is vehicle traffic and ensuring safe distances. Given all you’ve travelled, what is ideal cycling infrastructure that you wish was more prominent throughout the Americas?

LS: Many people have asked us about dangers and specifically crime problems, and it is true that statistically places like Mexico, Brazil and Central American countries have high homicide and violent-crime rates. However, our greatest safety concern is traffic. The danger is due to being in close proximity to motorists, often driving too fast too recklessly, sometimes intoxicated, often distracted, sometimes angry or stressed. We’ve heard so many stories of cyclists being struck by vehicles; some roads are quite notorious for this. Almost all our transportation infrastructure in the Americas is geared towards motorists, not non-motorized humans. The effects are harmful, not only for cyclists, but for everyone in terms of air pollution, congestion, disrupted neighbourhoods and greenhouse gas emissions. 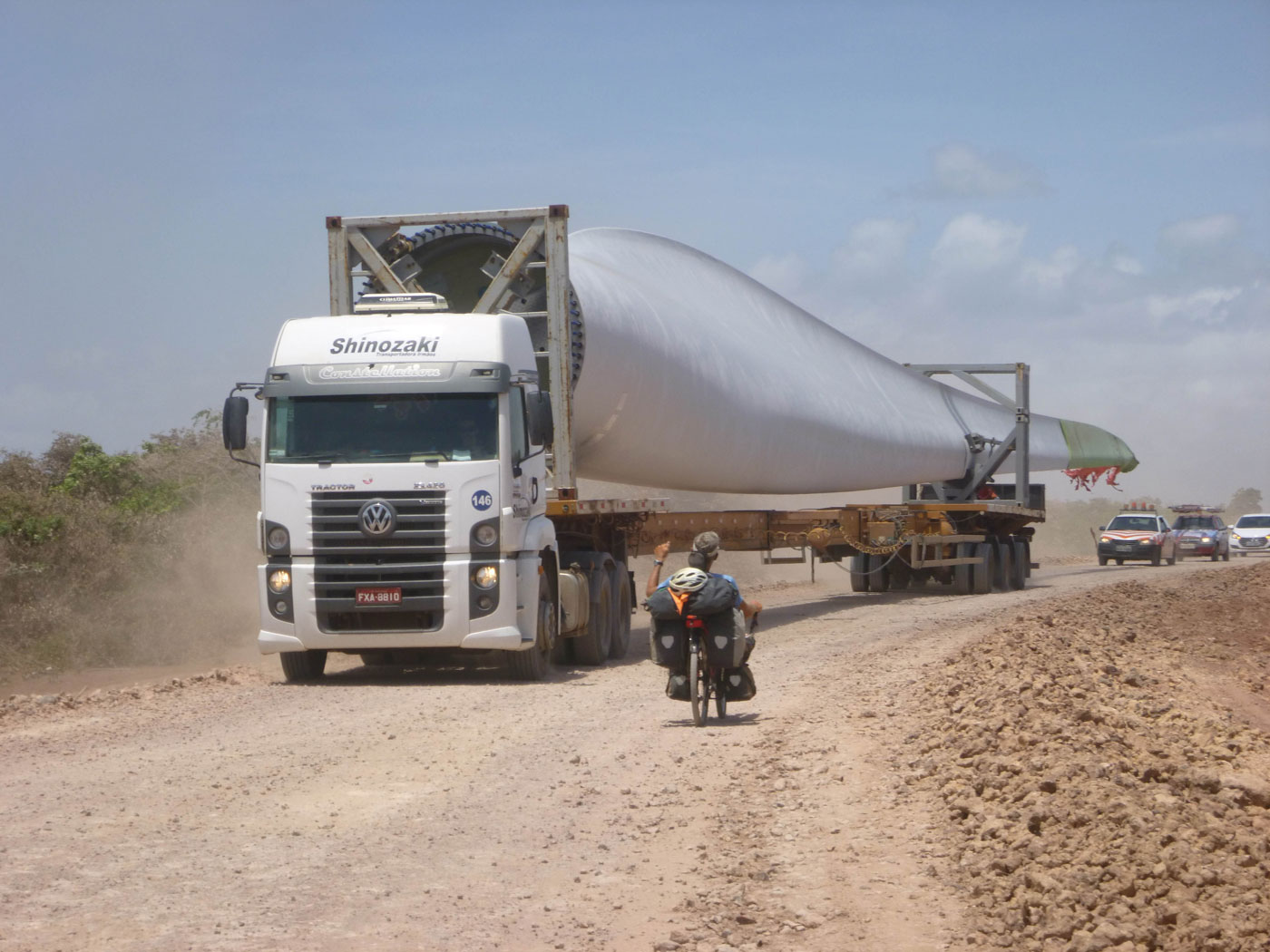 Traffic is just one of the challenges of travelling by bike. Regions with dedicated bike paths and weekly road closures create community along with safer biking conditions.

Surprisingly, perhaps, we found North America more stressful to ride than most parts of Latin America, maybe because of traffic volumes on the routes we were on, especially on the east coast of the States. Also, the number of designated cycle paths is limited; we’re almost always in traffic. There are significant amounts of ciclovias in many Latin American countries, especially in large cities in Brazil, Argentina and Colombia. There are also Sunday road closures to motorized traffic for routes in most large cities, which really bring out a lot of cyclists, skateboarders and pedestrians: lots of great energy and community spirit.

NS: In many of your social media posts, you both reflect on the urgency of our need to address climate change. While your trip models an alternative form of travel, what other hopeful models have you come across as we face such an urgent, global crisis?

LS: I wish I could be more hopeful and optimistic about the climate change issue, that I could share uplifting stories to give hope based on our experiences. And it is true we have met people in every country who are fully aware of climate change, of its effects in their own regions, who are pushing for meaningful actions to mitigate the threats. However, most people everywhere do not have climate change front of mind, do not seem to feel any urgency around the issue, are more concerned with more immediate issues like security and jobs and economic growth. And there are trends pulling in the opposite direction to the one we need to be going in, as witnessed by the Trump administration’s gutting of climate goals and environmental protections, and the recent victory of Bolsonaro in Brazil. With increasing polarization in many countries (even Canada), the chances for meaningful actions around climate change diminish significantly. This is happening at the worst possible time, as the window to get a handle on this problem is rapidly closing. If I was a betting person, and as a student of history, I would not bet on humanity getting its act together and making the dramatic changes required now to prevent runaway climate destabilization. But hope is better than despair; it keeps me going (and sane) and there is always room for surprises in human affairs.

NS: After a recent report about the loss of biodiversity globally, you both lamented how cycling through the Americas rarely took you through undisturbed landscapes. From the decades-old expression “think globally, act locally,” is this an area where you might try to create change when you return, and will you approach it differently than you might have before this trip?

LS: Certainly this trip and seeing how much of nature we have already destroyed reinforces for me the urgency of cutting back on our consumption of energy and pretty much everything, especially those of us in the rich world. Individual actions alone won’t be enough to save us from ourselves, but how each of us lives is highly symbolic and gives some credibility if we live what we preach. I really believe a massive cultural shift away from materialism and towards a more communitarian ethos—one that respects all living beings—is required.

When we got to Patagonia in southern Chile and Argentina, we finally began to see wilder country, something conspicuously missing from most of the territories we had travelled since leaving home. It reinforced for us that in west-central British Columbia we are quite privileged to have a landscape relatively un-dominated by human activities in comparison to most of the world. 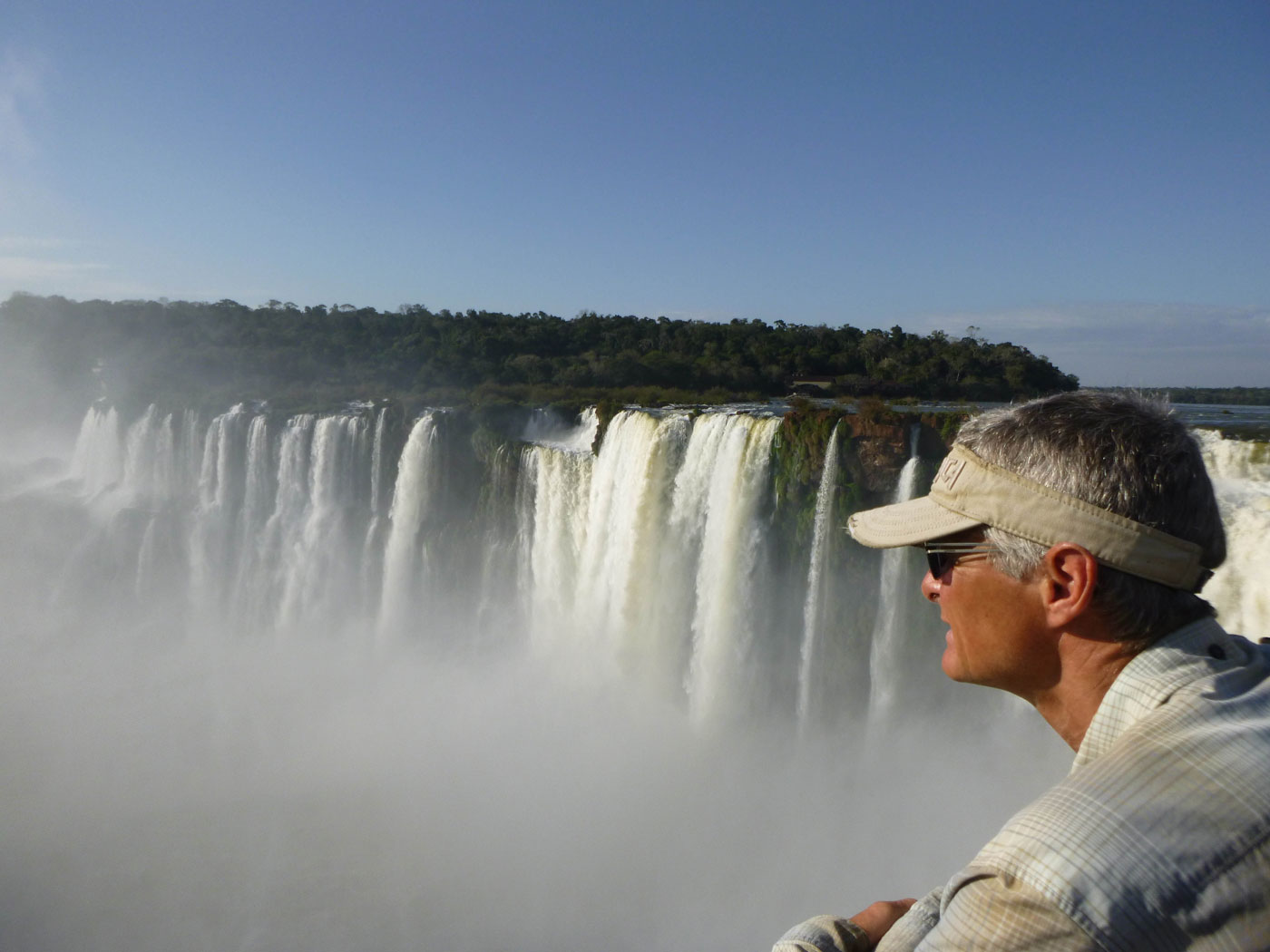 Northward bound: Schaefer takes in the view at Iguazú Falls, Province of Misiones, Argentina in June as the pair continued their journey north after venturing to the southern tip of Argentina.

Nikki Skuce enjoys commuting by bike but has never self-propelled herself across the country, let alone the continent. She is the director of the Northern Confluence Initiative based out of Smithers, B.C. 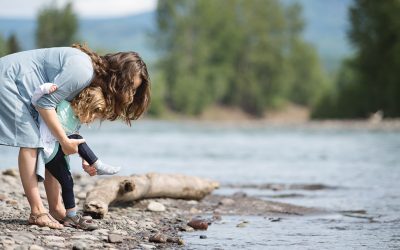