The question of how to find meaning in life has puzzled humans for perhaps as long as our species has existed. Finding meaning—to feel life has purpose and experience fulfillment—is what late psychologist Viktor Frankl deemed in his book Man’s Search for Meaning to be “the primary motivational force in [humans],” a notion he realized while interned in a Nazi concentration camp.

While it may seem somewhat cliché, I, too, am captivated by this field of inquiry. My fixation on how to construct a meaningful life for myself, however, has evolved into a scholarly pursuit. As a graduate student at University of Northern British Columbia, I currently research meaning in life with nomadic Eveny reindeer herders in Northeastern Siberia. You may be curious: what does meaning in life look like for people whose lives revolve around perpetually moving through the tundra with herds of reindeer? After briefly describing Eveny culture, and emphasizing the role movement plays in their way of life, I do my best to answer this question using my preliminary findings.

Who Are the Eveny?

Movement has always been a hallmark of Eveny culture. Since migrating from their ancestral homeland in Eastern China about 3,000 years ago, Eveny and their close linguistic and cultural cousins, the Evenki, have become the most widely dispersed Indigenous people on the planet—inhabiting territory from Mongolia in the south to the Arctic Ocean in the north and from the Pacific Ocean in the east to the Yenisei River in the west. (For a more detailed, albeit still brief, description of Eveny, see anthropologist Piers Vitebsky’s 2012 paper Wild Tungus and The Spirits of Places.)

Today, about 22,000 Eveny live in Siberia, about two thirds of whom reside in the Sakha Republic, while the rest are scattered through neighbouring regions. These parts of the world are notorious for their harsh climates, especially the Sakha Republic, where the thermometer drops to a frigid -65°C in the winter and climbs to a scorching 35°C in the summer—an astounding range of 100°C. In fact, Verkhoyansk—a village whose eponymous mountain range courses through the heart of Eveny traditional territory, rising 2,000 metres above sea level—is the coldest inhabited place on the planet, where a temperature of -71°C was once recorded. To thrive in what most would consider an inhospitable climate, Eveny created a culture in which survival depends on constant movement through the landscape with herds of reindeer.

As Vitebsky describes throughout his ethnographic masterpiece, suitably titled The Reindeer People, moving with reindeer shapes every aspect of Eveny herders’ lives. The staple food of reindeer is lichen, a fragile plant that does not perish in the winter. While grazing, reindeer either quickly consume or trample their primary food source. So, to ensure their herds are always able to eat their fill and avoid starvation, herders, usually in groups of five to 10, migrate frequently to fresh pastures. In winter, herders pitch their tents and set up camp in sheltered valleys ideal for fishing and hunting. During summer, they follow the melting snowline up mountainsides to areas better for other seasonal activities, like berry picking, or insect-free alpine pastures perfect for reindeer grazing. These migrations prevent resource depletion, like overhunting and overgrazing by reindeer.

In a recent article, Vitebsky and his colleague, Anatoly Alekseyev, an Eveny scholar and former reindeer herder, discuss how movement also colours herders’ emotional lives. A short while after setting up camp, the urge to migrate once more—a sort of anxious tension—begins to build, and herders feel compelled to pack up and head to their next destination. Like their reindeer, who yearn for fresh lichen, herders become restless if they stay in the same spot for more than a few days and tempers begin to rise. Even though they often feel sad to leave a camp behind, herders are pushed from an old site and anticipate the new with excitement. When they arrive at a campsite, they feel relieved and relaxed as tension dissipates and the cool mood of cooperation returns. This tension/release binary structures Eveny herders’ emotional experiences and reflects their worldview that life, like reindeer migration, is based on linear movement.

A short while after setting up camp, the urge to migrate once more—a sort of anxious tension—begins to build, and herders feel compelled to pack up and head to their next destination.

Another way ideas of movement manifest in the Eveny worldview is through Vitebsky and Alekseyev’s concept of timeshadows. When Eveny make plans to move to a new location, they believe they project their intention to visit a place ahead of themselves—a timeshadow of their selves. Timeshadows are nearly identical to the notion of djuluchen described by Eveny scholar Olga Ulturgasheva in her book Narrating the Future in Siberia: Childhood, Adolescence and Autobiography among the Eveny. Djuluchen are a sort of spiritual doppelganger that Eveny consider to be an intrinsic aspect of personhood. When a person begins to plan or talks about undertaking a journey, or even achieving a particular goal in life, her or his djuluchen separates from the body and undertakes the same journey, but arrives instantaneously, prior to its owner. When he or she does arrive, or achieves the goal, the djuluchen rejoins its owner, who becomes whole again. This travelling spirit—whether referred to as a timeshadow or a djuluchen—further illustrates the importance of movement to Eveny personhood, culture and worldview.

Prior to European contact, all Eveny were nomadic and migrated with reindeer. However, during Soviet times, in order to control the nomads and exploit their labour, the Union forced Eveny to settle in villages and work on collective farms, and it became increasingly difficult for them to herd. Today, a relatively small portion of Eveny continue to herd, either for state farms or with an association of families called an obshchina. It is these Eveny with whom I lived and spoke.

In autumn 2018, after living in the regional capital, Yakutsk, for a month and a half, I flew two and a half hours north in a 60-year-old Soviet-era plane past the Arctic Circle to Batagay-Alyta (also known as Sakkyryr). The village rests at the foothills of the Verhoyansk range in the Eveno-Bytantaysky National District—one of the most inaccessible regions of the Sakha Republic. According to the local administration, I was the first foreigner ever to register in the community—a necessity when one is visiting Russia and intends to stay in a village for more than a week. As my interpreter had contacts in the community, it was not difficult for me to find people to speak with. And, given my status as an exotic Canadian with maple candies and smoked British Columbia salmon to share, just as many people were interested in speaking with me as I was with them. 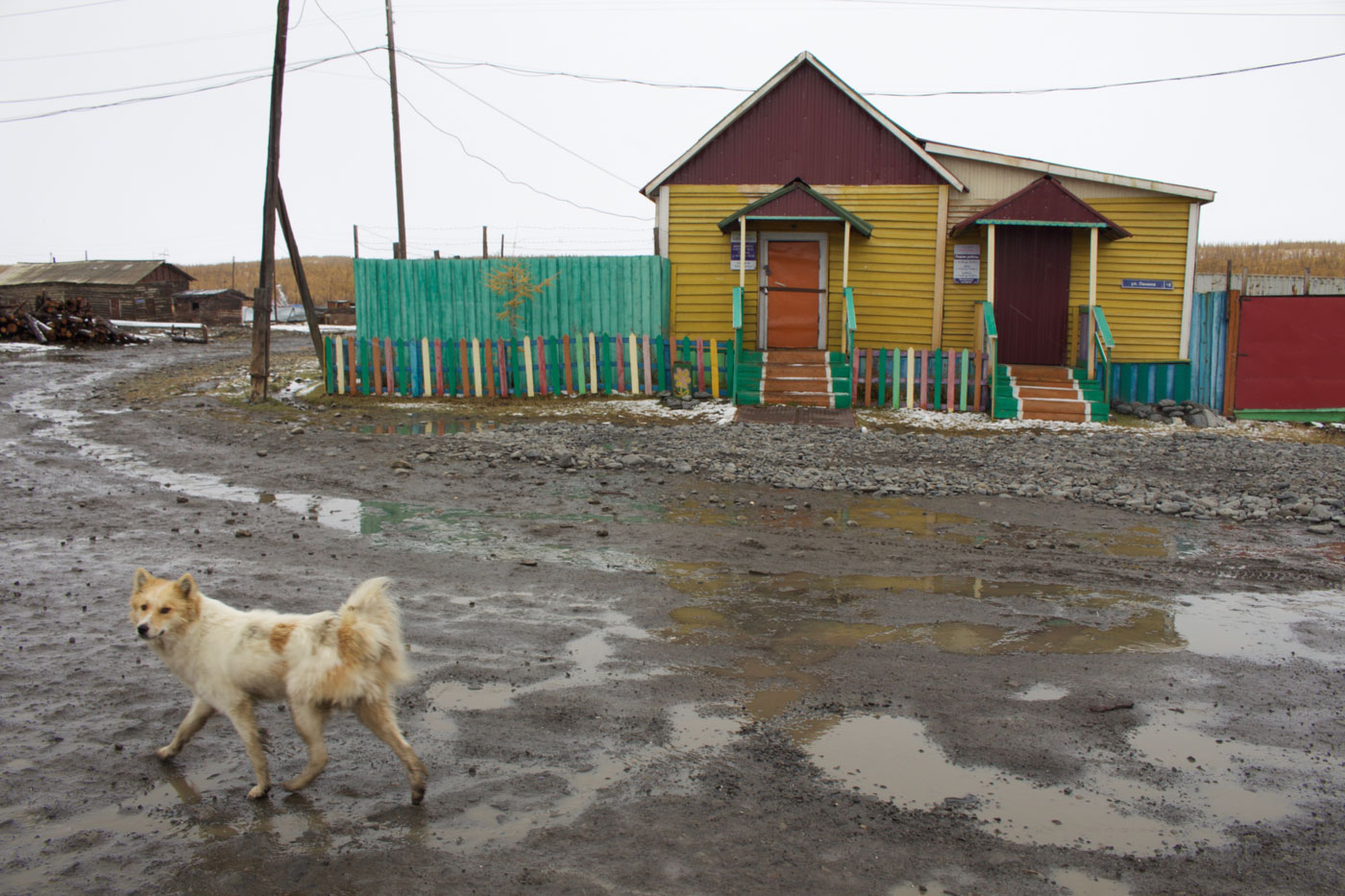 A typical building in Batagay-Alyta. Photo by Sean O’Rourke.

Following my return to Prince George, B.C. in late September, as I began to analyze my interviews, I found it quite moving to learn that herders’ and reindeers’ lives are so intertwined that caring for these animals is their greatest source of meaning in life. This is no surprise; save for the week or two each year herders are in the village, they spend every day caring for and migrating with these animals, eating mostly reindeer meat and looking out for their herd’s wellbeing.

What did surprise me, however, is that herders reported that being able to move through their lands provides them with another avenue to meaning in life. They linked moving through their “beautiful” territories with feelings of freedom, fulfillment and happiness. When they must stay in the village, say, to visit family or pay bills, they are frustrated by their inability to move freely and feel restless and irritated. Some herders indicated the only way they can bear being in the village is to drink alcohol for the entirety of their stay. In their aforementioned publications, Ulturgasheva and Vitebsky have repeatedly noted this pattern of drinking, which they link to Soviet-driven acculturation and social-welfare collapse following the Union’s demise. It seems that just as their ancestors’ survival was predicated on constant migration, these herders’ wellbeing also depends on their movement.

The unique culture of Eveny reindeer herders is a testament to the seemingly infinite diversity that exists within humankind. Yet despite our differences, each member of our species shares a desire to lead a meaningful existence—what Canadian psychologist Paul Wong dubs “the good life.” But exactly what the “good life” looks like and how we achieve feelings of meaningfulness are determined by the norms, values and circumstances of our cultures. For the herders with whom I spoke, ability to herd reindeer and move freely through the landscape are most definitely key aspects of their good life. So, what does this mean, then, for a culture that, although incredibly vibrant and resilient, has been methodologically sedentarized by the state and is now plagued by social problems, like alcohol abuse?

But exactly what the “good life” looks like and how we achieve feelings of meaningfulness are determined by the norms, values and circumstances of our cultures.

This is one of many questions I hope to answer as my research unfolds, although I do have some initial ideas for how notions of movement can be employed to improve wellbeing. If herders associate inability to move with negative emotions, perhaps villages could be set up in a manner that promotes movement between a number of locations, a suggestion that has also been proposed by Tatiana Safonova and István Sántha, anthropologists working with Evenki herders in Southern Siberia. Perhaps herding camps could be arranged for Eveny youth (akin to the Indigenous culture camps that run in British Columbia). Youth herding programs exist at present, but most are facilitated through schools and none that I am aware of take youths out on the tundra for an extended period of time.

As my thesis progresses, I will flesh out these ideas and, hopefully, create suggestions that will be of use to Eveny herders and their communities. Even though, at the moment, I am unable to draw any concrete conclusions, I can say with absolute certainty that the lives of these herders illustrate just how vital movement can sometimes be to shaping both what people consider to be the “good life” and our species’ wellbeing.

O’Rourke and his interpreter, Moisei Zakharov (Моисей Захаров in Russian), sitting in front of a typical Sakha/Russian meal: reindeer meat, various types of bread, fried fish, cloudberry jam and raw pork fat, among other things. “We ate reindeer for literally every meal,” the author says.

Sean O’Rourke is an interdisciplinary studies (psychology and geography) graduate student at the University of Northern British Columbia researching the intersection of meaning in life and land-use with Eveny reindeer herders in Siberia. Although he grew up in Calgary, Sean has lived in northern BC for the past two years. He has spent the past four years undertaking anthropological and psychological research in collaboration with Indigenous communities throughout the circumpolar north.